Have you ever noticed a fleshy green weed with red stems and yellow blooms rapidly growing along sidewalks or driveways? This weed may be purslane, a succulent that grows in clusters in several climates all around the globe. Some may enjoy this weed in crisp summer salads and see purslane as a delight to have as it grows labor-free. Purslane, for others, can be an unwanted weed that is growing in their beautiful lawn. Here is everything you need to know about the common weed purslane, from its health benefits to growth-control.

How do I identify purslane? 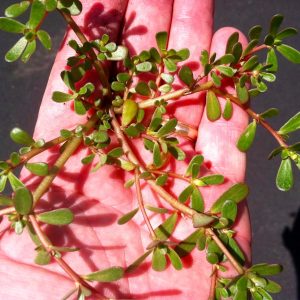 Purslane has thick, teardrop-shaped leaves. Its stems are usually a red or pink shade and also swell due to holding a significant amount of water. It is often growing in clusters very low to the ground, but when it grows excessively, the stems can lift off of the earth. Purslane grows in the summer season, and when the weed blooms, small yellow flowers appear for a few hours in the morning.

While purslane is very common, some other plants look similar to it. It can be easy to misidentify purslane with other species such as spurge. While spurge grows in clusters and has identical looking stems, there are differences that you can spot with a sharp eye. For one, purslane has fleshy, round leaves, while spurge has flat, serrated leaves. It also exudes a milky white latex not found in purslane.

Where does it grow?

Did you know that scientists speculate that the reason purslane is so widespread around the world is that Native Americans and other people groups spread the seeds? Purslane is a highly nutritious and easy-to-grow herb, so people used to sprinkle the seeds all along the Americas purposely. Given this, it can be found in several climates and continents, including right here in New England.

Purslane can be found growing right in your yard. Often, it can even thrive in cracks in driveways or sidewalks. This is because the weed can grow in various kinds of soils. It has the ability to survive in nutrient-rich soils, dry soils, and rocky ground. It will also withstand heavy rainfall and high temperatures but does not manage well in colder conditions.

Can I eat purslane?

If purslane growth doesn’t bother you in your yard or garden, purslane can actually be a nutritious addition to your diet. Although the weed is 93% water, it is packed with vitamins and minerals that are often compared to those in spinach. Purslane provides essential nutrients such as vitamin C and iron. Many gardeners enjoy having purslane in their garden because it can be a fresh and accessible ingredient to salads, soups, and even omelets.

It is said to have a tangy lemon and pepper flavor. Be sure to not mistake purslane for the look-alike spurge though, because the milky, inedible substance in spurge is quite toxic.

How do I control purslane? 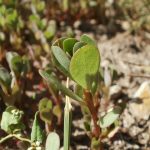 Purslane is a hardy weed that can withstand high temperatures and severe drought. Along with this, the plant is frequently dropping tiny seeds from their seedpods, making it challenging to stop purslane’s growth. Just a single purslane plant can produce more than 50,000 seeds! The best time to remove purslane is before the plant produces seeds. The weed is easy to pluck by pulling up its entire body including its roots and disposing of it into a trash bag. This will prevent the weed from reproducing and infesting a larger plot of land. Avoid putting the purslane in your compost or anywhere else in your yard, because the pulled weeds will continue to mature. Another measure you can take to prevent purslane from growing is to block sunlight from hitting the soil. This can be done by placing down a layer of mulch where the first purslane plants grew.

If the purslane has matured too far to weed out by hand, herbicides can also remove the unwanted plant. If you are having difficulty controlling purslane, MissionGreen Services provides a Broadleaf Weed Control through our sustainable lawn care program. It is applied four times throughout the year to prevent purslane germination and keep your lawn weed-free.

Whether purslane is a nuisance or a treat in your yard, this common weed is a hardy and widespread herb with surprising nutritional benefits. If you would prefer your yard purslane-free, reach out to us at info@missiongreenservices.com or give us a call. Let’s transform your lawn to be weed-free and more vibrant than ever!