Sometimes, the inevitable happens: Even with proper trimming and an attentive lawn care company, a nasty disease may rudely barge in and interfere with the health of your lawn. One of these pathogens that would love to inhabit your grass is rust fungus.

Rust is an easily identifiable lawn disease that grows in several climates. While the appearance of the disease may look daunting, there are several practices that will prevent and remove rust quickly. First, it is essential to know how this particular fungus works. It attaches air-borne spores to a host plant. These spores most likely have come from other distant infected plants. Here is everything you need to know in order to identify, prevent, and eliminate rust fungus from your yard.

How do you identify rust fungi? 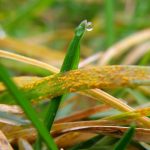 Rust is extremely easy to identify in the grass due to its coloring and characteristics. This fungus, named after the similar appearance to rust on oxidized iron, can be varying degrees of bright orange and yellow tones. It is also most likely to affect Kentucky bluegrass, perennial ryegrass, and tall fescue. In its early stages, it may have a yellow tinge, resulting in the affected grass looking dry. As it matures, the color deepens to an intense rusty orange.

It initially appears as patchy and can eventually stretch along whole blades of grass. Rust often has a powdery texture, which is a sign that the fungus is fertile and producing spores. This powder picks up in the wind or on shoes and carries spores to other patches of grass. The nature of its reproductive means can make it difficult to prevent spreading to other grass areas.

What damage might rust fungi cause to my yard?

While rust spores appear on the surface of grass as bright powder, the infection actually grows within the plant tissues. This disease, while it sometimes doesn’t kill grasses, can stunt growth and maturation. You may also see the blades of grass withering as if it is dehydrated. While your lawn may not be dying, it makes the grass susceptible to other diseases and is simply an unpleasant eyesore.

Here’s the good news: Various types of rust only affect distinct species. This means that the rust species that may be attacking your lawn will most likely not harm your garden plants, bushes, or surrounding trees. Any other plant species will most likely be in the clear from grass-specific rust fungus.

How do you prevent rust fungi growth?

It is important to know that grasses have the highest chance of being infected with rust in the late summer and early fall. This fungus thrives best in warm, moist environments. The humidity and hot temperatures invite rust in to take your lawn as a host. With this information, you will have the ability to take precautions against rust in the coming seasons.

The easiest prevention against rust is to allow your lawn plentiful amounts of sunlight in order to evaporate excessive moisture. Relocate backyard furniture and avoid planting tall bushes that produce cool, shaded areas. Another precaution against rust is to choose a grass type that grows thick. You may also fertilize your existing lawn in order to create denser and more durable grass areas. Thicker lawns prevent several diseases and pests, including rust, from inhabiting the area.

How do you treat rust fungi? 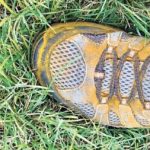 Before reaching for the fungicides, there are several things you can do to prevent rust from spreading further into your yard. The first solution to lawn rust is to follow all of the precautions that prevent lawn rust. By fertilizing, reducing moisture, and allowing sunlight to strengthen your lawn, the grass may be able to fight off the infection without any fungicidal interference within a few weeks.

Another solution to minor rust infections is to trim the infected grass blades. This will reduce the spread of infection to other parts of your lawn. If all else fails, applying a fungicide will be a powerful inhibitor to fungus growth, and your lawn should begin restoring itself to its original healthy state.

During the hot and humid months, always look out for rust in your lawn. Scan your grass for any signs of yellow spots or orange patches in order to catch this invasive fungus before it reproduces. While the look of rust may be concerning, the best thing any landowner can do is properly tend to their lawn throughout the year. With proper sunlight, fertilization, and drainage, your grass will be able to best withstand rust when it comes along.