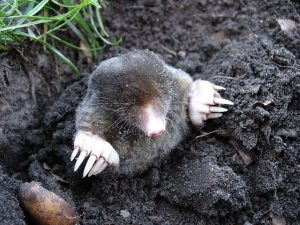 Have you ever discovered mounds of dirt scattered among your yard, as if an animal has dug up your turf? Have you ever uncovered gnaw marks along shrubbery roots? If so, you may be dealing with a lawn-damaging pest. Tunnels throughout your landscaping are frequently caused by two infamous mammals: moles and voles.

While the names are alike, their habits and species are very different. It is important to know which one you are dealing with in order to stop and prevent any further damage to your lawn. Here are the key differences between moles and voles, and how to eliminate them.

How do you identify moles versus voles? 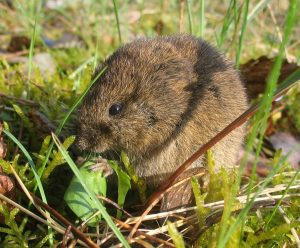 If you suspect a critter may be tearing up your lawn and softening the ground beneath your feet, chances are you are dealing with a mole. Moles are large mammals that burrow underground for earthworms and inhabit your lawn. While nearly sightless, their sense of smell and movement is incredibly heightened, making it difficult to see them in person. Moles generally breed in the spring from February to May, so it is essential to trap and relocate moles before they reproduce.

Unlike moles, voles are smaller, hamster-like mammals that are also known as “field mice”. Rather than living beneath your lawn, they prefer to dig narrow pathways throughout woodland areas and other vegetative locations. They are not picky eaters like their pest counterpart, and will feast on your garden vegetables, yard brush, nuts, seeds, bulbs, and dead matter. While they only live for up to six months, they breed all year round. One mating pair can produce a hundred voles in a year, so it is essential to eliminate voles before they reproduce.

What damage do they cause?

While the tunneling habit that moles exhibit may aerate the land, the damage that it does to your turf is unattractive and softens the feel of the ground. You can tell that the damage in your lawn was caused by a mole by several factors:

Doesn’t sound familiar to the damage in your yard? The culprit may then be voles.

As an omnivorous species, voles are much more likely to cause damage to surface-level and just-below-the-surface vegetation such as trees, gardens, and bushes. Voles do not produce dirt mounds like moles, but you may find damage to tree trunks or shrub roots due to the pest’s gnawing. Here are several factors to keep in mind when identifying voles:

How do you get rid of moles versus voles?

So you’ve identified the culprit of the damage to your landscape. Now what? Thankfully, there are several methods to get rid of and prevent both moles and voles.

From repellants to traps, there are a variety of solutions to your pesky problems. If moles have invaded your lawn, traps are a quick and efficient solution. You can also apply a natural castor oil-based repellent to your lawn. While it does not kill the mole, it is irritating to their skin and digestive system, forcing the mammals to search for other hunting and breeding territory.

While vole infestations are equally irritating, there are several more methods you can take to suppress voles and impede further landscaping damage. In small areas such as backyards, trapping voles with bait such as peanut butter is the best method to ward off these rodents. You can also guard your garden vegetables, bulbs, and shrubs from future vole damage by planting roots throughout some gravel, making it difficult for voles to grab a bite. Trees and shrubs can also be protected by placing thin, plastic netting over roots and other susceptible areas.

Be sure to remember…

While moles and voles are both tunneling mammals with counterproductively similar names, the damage they cause and their ways of elimination are very different. Understanding the difference between moles and voles is the first step to preventing and treating any infestations. The carnivorous moles produce deep canals beneath your turf and create unappealing dirt mounts, but their herbivorous counterparts, voles, breed quickly and feast on both bulbs and roots. By identifying the culprit immediately and beginning the correct repellent methods, you are one step closer to a critter-free, impeccable landscape.

N.a. “Mole and Vole Damage to Lawns.” Center for Agriculture, Food and the Environment, 26 Oct. 2016, ag.umass.edu/home-lawn-garden/fact-sheets/mole-vole-damage-to-lawns.