How To Get Rid Of Mushrooms In Your Lawn

How To Get Rid Of Mushrooms In Your Lawn

If mushrooms have invaded your lawn, don’t panic! As much as an eyesore as they may be, the appearance of mushrooms isn’t a sign of bad lawn health. In fact, it means that your soil is dense with organic matter such as last autumn’s unraked leaves. These fungi are performing a decaying process that will eventually make their nutrients accessible to your grass.

Even though most fungi are helpful and virtually harmless, you may still not want them flourishing in your yard. If you have dogs or children, it is especially important to remove poisonous New England varieties such as Rhode Island’s amanita muscaria.

Unfortunately, it is extremely difficult to kill all of the dormant fungi within your soil. Spray fungicides are frequently ineffective, as they only reach the top layers of the earth. Even if you target deeper layers of soil, with enough moisture and organic matter spores may mature over a year after your treatments!

Here’s the good news: If those white caps are popping up from beneath the soil, you will be able to remove them in no time. From homemade treatments to a simple mowing, there are many ways to kill the fungi and keep them at bay today.

Understand why mushrooms are appearing. 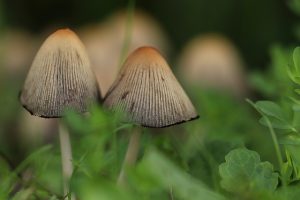 The first step to stopping the mushrooms from appearing is to understand why they are popping up in the first place. The mushroom caps that we see on tree stumps, shady ground, and in our own lawn are the fruit of a fungus that is living beneath the earth.

If you are dealing with mushrooms in your lawn, underground spores have woken from dormancy to mature into the mushroom body as we know. But why have they grown now? Spores mature when they are given viable conditions, such as a damp environment and a dark location. Have you been getting excessive rain and cloudy days? This could be one reason that fungi is appearing in your yard.

Pop off the mushroom caps.

Sometimes, the best answer to mushrooms is to simply remove them by hand. Most of the time, they pose no danger to your lawn. Plucking the mushroom bodies will remove the eyesore from your home. It takes little effort on your part and requires no chemical solutions.

However, make sure to completely dispose of the mushroom caps far away from your land. The gills underneath the caps contain spores, which when spread to other areas will expand the mushroom’s growing territory. Then, simply reduce your turf watering and hope for sunnier skies.

Between the grass roots and the stems, there is a layer of organic material composed of unraked leaves, grass clippings, and wood. This is called the thatch layer— it is often what feeds and energizes the mushrooms.

Oftentimes, the decomposition process is slower in some lawns so it is best to remove the thatch layer that has built up. By using a power rake in mushroom-dense turf areas, you can deplete the mushrooms of organic matter that keeps them thriving.

Mow up the visible mushrooms.

Only have a few occasional mushrooms? A quicker manual option to getting rid of mushrooms is simply by mowing over the fruiting bodies.

It is best to have a lawnmower bag to catch the mushrooms in order to prevent the spores from traveling, but picking the caps up by hand will suffice. Afterward, dispose of the mushrooms far away from your lawn!

At MissionGreen, we prioritize environmentally-friendly lawn care practices. There are many alternatives to store-bought fungicides that damage your lawn and don’t kill spores. One of these alternatives is a dish soap solution: simply mix two tablespoons of dish soap with three gallons of water.

Before applying to the mushroom-invaded areas in your lawn, de-thatch or aerate these places with a hand aerator. An aerator will loosen small plugs of soil where the solution can seep down and target the mycelium, the vegetative part of mushrooms.

Then, simply spray or pour the solution throughout the affected area while caring to fill the aeration holes first.

One of the best mushroom growth preventions is applying hydrated lime to the affected areas of your yard. While this doesn’t necessarily kill the fungi, it prevents mushrooms from popping up in the future.

After manually removing the visible fungi from your turf, sprinkle the lime in these same areas. The hydrated lime will fill in any areas where spores may mature into fruiting bodies.

Mushrooms may be a nuisance, but there’s no need to worry! These fungi in your yard are performing the important job of decomposing organic matter into usable nutrients for your own lawn. Best of all, these given methods will remove mushrooms today and prevent mushroom growth in the future.