This summer, there’s been an increase of reports from people encountering a large wasp species. Some reporters have described them as the “biggest wasps they’ve ever seen” and others have misidentified them as “murder hornets”.

While murder hornets are a fearsome sight (in fact, they’re the biggest hornet species to exist), the actual species that is popping up in Massachusetts and Rhode Island news is much less frightening. Despite its name, it’s virtually harmless to people and pets. Here’s what you need to know about this wasp, and why it’s not as much of a threat as people think.

What is the difference between the Cicada Killer Wasp and murder hornets?

The Cicada Killer Wasp is a native wasp species in the eastern United States. While they might look aggressive, they are truly gentle giants compared to other wasp species. At most, they will damage lawns or sting if provoked. If you think you’ve seen a murder hornet, it’s most likely one of these common creatures. 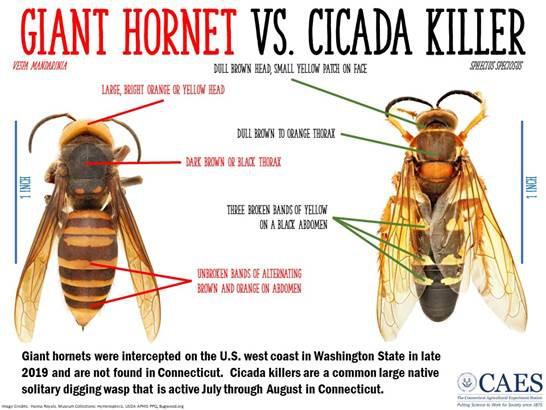 These wasps are frequently mistaken as other species of wasp, so knowing what they look like will make it easier to identify and alert lawn care professionals. Like many others, they are black-bodied with broken, yellow stripes. They also have pointed abdomens with large stingers. Despite these features, they are most recognizable by their massive size. Adult Cicada Killer Wasps can grow to be as much as two inches in length, so we don’t blame you if you run the other direction!

Cicada Wasp Killers are easily mistaken for Asian Giant Hornets, also known as “murder hornets”. However, there are a few visible differences between the species. Asian Giant Hornets have large, yellow heads the same width as the rest of the body. They also have thick, unbroken yellow rings around its abdomen.

Where do Cicada Killer Wasps live?

You might find these wasps burrowing within your yard. Oftentimes, they will take up residence wherever loose soil is. Environments such as garden beds and playgrounds might be tempting for wasps searching for a new home. They are most abundant in dry, sandy soil areas and will quickly abandon their burrows if they are dampened with rain.

They might have a fearsome name, but Cicada Killer Wasp are actually quite harmless! They do not have the nest-guarding instinct that other insects have, making them much more docile around humans. Cicada Killer Wasps get their name from their unique hunting ability. Female wasps will use their stinger venom to paralyze cicadas, which are the larvae’s main food source.

While these wasps have the potential to sting, they won’t unless provoked. However, they may cause harm to your yard. Cicada Killer Wasps often burrow in soil at the base of shrubs, on sidewalk borders, and within grass. They frequently churn up soil in the process and loosen up roots. In this case, a lawn care professional will be able to weed the wasps out.

Help, I have a wasp infestation! What do I do?

While Cicada Wasp Killers aren’t necessarily dangerous to be around, they sure can be nuisances. Local lawn care specialists are trained to identify and treat pest problems in residential and commercial areas, including wasp infestations.

Dousing the infested soil with water is a quick solution to get the current nest to leave. However, as soon as the soil dries, they are very likely to come back and reborrow. Professional pest control is much more effective in eradicating Cicada Wasp Killers, especially if they are causing damage to your lawn or garden.

There’s no need to worry about murder hornets, but Cicada Killers may churn up trouble.

Looking to rid your lawn of unwanted pests? We provide exceptional pest control and prevention to Rhode Island and Massachusetts residents, so you’ll always feel safe at home. Call us now at (413) 998-7829 to get a FREE quote on applications today.