In the winter, homeowners face their nemesis across Connecticut, Rhode Island and Massachusetts: the invading Asian ladybeetle. These insects find shelter in warmer environments, such as your home, when temperatures drop. In the middle of winter, you might find several of them crawling near your windows, doors, and on your ceiling. However, many blame this invasion on a beneficial and harmless lookalike, the ladybug.

Ladybeetles are a nuisance in many homes as well as trees and shrubs around your property. Not only do they crawl inside houses, but they also damage crops and feed on beneficial aphids, including ladybugs. So if you find them pop up in your home, they will also be around your property come springtime. Here’s everything you need to know about ladybeetles and ladybugs if they pop up in your home.

Where does the Asian ladybeetle originate?

While ladybugs are native to North America, Asian beetles are not. They originated from many East Asian regions, including China, Japan, and Russia. They were introduced to the United States in the early 1900s in hopes that they would control pest populations. However, Asian beetles are now a nuisance to many North American farmers and homeowners.

What is the life cycle of Asian ladybeetles and ladybugs?

The lifecycles of these two insects are very similar to each other. Ladybugs and Asian ladybeetles go through four stages: egg, larva, pupa, and adult. Both species’ eggs can be identified as oval, yellow eggs laid in clusters of 5-50 in a sheltered area such as beneath a leaf. 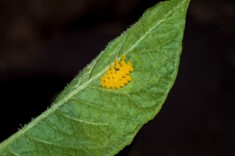 Then, they hatch into similar-looking larvae. Both insect species resemble alligators in the larva stage due to their spined backs and grey bodies. Their larvae are also hard to differentiate because they both have bright yellow splotches along their body. Their pupae are also hard to distinguish because both species have round orange bodies with black markings.

However, during the adult stage, it is far easier to tell Asian ladybeetles and ladybugs apart. In their final stage, their wings are protected by the hard exterior shell called the elytra. Asian ladybeetles’ and ladybugs’ elytra develop into bright colors. While Asian beetles become shades of reds, oranges, and yellows, ladybugs are primarily bright red. Plus, their markings make it even easier to differentiate between the two. Those with a black “M” marking on their head are Asian beetles, while those with a white “W” spot on their back are ladybugs.

The Habitat of Asian ladybeetles and ladybugs 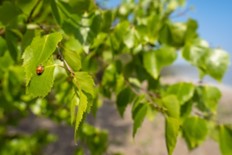 Both the Asian ladybeetle and the ladybug can be found in a variety of habitats. These areas include forests, crop fields, gardens, shrubs, trees, and grasslands. In addition to outdoor environments, Asian beetles also make their way indoors during winter. While ladybugs are more likely to shelter outside for the winter, Asian beetles prefer areas with lots of light, so you might spot several around your home’s windows and doors.

The harmful impact of Asian ladybeetles

If you’ve recently found ladybug-looking insects scurrying around your home, chances are they’re actually Asian ladybeetles sheltering for the winter. While they’ll eventually make their way back outside in the spring, Asian beetles are a nuisance year-round. They are aggressive, bite people and pets, and secrete blood when crushed or threatened. In addition, this yellow blood emits a foul odor that is sure to put off anyone nearby. Plus, it can stain fabrics it comes into contact with.

Thankfully if you’re concerned about your pet’s safety, there’s no need to worry. Contrary to popular belief, Asian beetles aren’t poisonous in most cases, so don’t panic if your pets decide to make a snack out of one or two. However, consuming large amounts of beetles in instances of an infestation would warrant a vet visit. 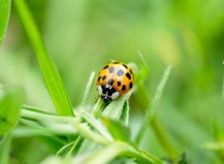 Finally, while Asian ladybeetles don’t eat plants, they can still harm outdoor environments. As voracious carnivores, they eat soft-bodied pests such as aphids. However, they also hunt beneficial insects, including ladybugs. In addition to eating them, many Asian ladybeetles carry a parasite that kills native ladybugs. As invasive insects, Asian beetles can destroy habitats by killing native insects and taking over crops by using their leaves to reproduce quickly.

The benefits of ladybugs

Although the two species look nearly identical, ladybugs are much more beneficial for your yard. If you notice ladybugs in your lawn or garden, there’s no need to call in the exterminators. They’re not invasive and aren’t likely to grow into inconveniently large population sizes. Instead, it’s helpful to let them be because they keep harmful aphid populations under control. Ladybugs can even eat as many as 5,000 aphids in their short year-long life! So while aphids are common pests that attack lawns and garden plants, ladybugs will help keep them at bay.